got sick, didn't play much

only got about 12 hours in this week, and that was mostly in two days of play. I got a cold from my weekend of revelry and travel and it kept me down for most of the week.

I did get in about 6k hands this afternoon while playing 5 different tourneys. Went 0-fer the tourneys so down $750 or so for that, but made about $2.5k playing cash so thats good. I'm getting good at running AK and KK into AA, but I coolered some regs so that's good.

would really like to get about 25 hours in before the end of the month, but thats in 3 days and I doubt it will happen. going to try to get up early and grind tomorrow. we shall see.

two good friends from college got married in Houston this weekend and it was like another college reunion. We had a great time and it was awesome to see everyone. They're a fantastic couple and wish them both the best.

now I've got 10 days to get in about 50 hours of poker to meet my monthly goals. I think I can do it if I adjust my sleep schedule back to normal hours and try to get my play in before baseball games. It is just really hard to play after being at the field for 3 hours especially when I catching guys in the pen and often warming up for potential relief appearances. My new plan is wake up in the morning. play from 12-5 or so in the afternoon. Then get a workout in after the game when I come home. I can eat a late dinner after the workout and pass out for the night. That would get me back to working out while still leaving plenty of time for poker. Hopefully I can put back on some of the weight I lost while I haven't been lifting over the last month.

that's about all to update from here. been watching a lot of WC, go USA beat algeria and get us into the elimination round. No comment on game 7 of the NBA finals.

hell hath no fury like a woman scorned for sega

posted this up in a thread on 2p2 after someone linked the youtube of the ESPN WSOP broadcast below:

this was my favorite year of WSOP broadcasts and that might be my favorite one ever. That was back when I was in college and taking summer school classes and I'd come home from class, then waiting tables until 11PM or later, and grab a 6 pack of beers and watch the WSOP broadcast that I had recorded on my VCR. I used to record all of them back then and rewatch them all the time. Then if it was a real good night my friends would get a .10/.25 NL game going I'd get to wander over to one of their apartments and play poker until 2AM or so. we'd always play until there were just a couple of us left because noone really wanted to lose more than 10 dollars, and in the end there be 3 guys playing for everyone's money and we'd finally just quit because we were all scared to lose 20 bucks playing HU. But whoever got the best of it that night would by beers for the next.

I'm not sure I'll ever enjoy poker as much as I did then. it makes me wistful just thinking about it.

I'm appropriately drunk tonight. Had a fantastic dinner with good friends and some new folks that I didn't know who were also very very cool. Then stayed late with the host after the WAGs went home, drank a lot more of the booze and wandered home with a good buddy while we discussed the finer details of life.

this is drinking at it's best. not blackout, not stupid, not driving, or any other retraded (inside joke) nonsense. Just enough to get social and fun and enjoy each others jokes and observations.

and let's go celtics. Win game two, punk the lakers, and let's get things rolling. I didn't ever really hate phil jackson until this year, but I'm tired of his BS. Somebody needs to end his streak, and who better than these celtics.
Posted by Jim Perry at 2:37 AM No comments:

- I've been playing a lot of rush poker because it is 6max NLHE crack. people can't play, I get to start and stop whenever, and I can get in a ton of hands 4 tabling. I actually play it on the toilet sometimes. That should be the next FTP advertisement; Rush Poker! The Best Form of Poker When You're Taking a Dump!

- our team is off to a great start 5-1. I've only thrown 5 innings but so far so good even though my control is lousy. We have a really deep staff and all of the other guys have been throwing fantastic. I'm hoping my arm builds and builds into shape so that at the end of the season I'm approaching what I was at the beginning of last year. It is going to be tough though because my rotator cuff is not happy.

- went on the 5th anniversary cruise with my buddies from duke baseball. we had a blast with so many hilarious stories and moments. pic at end of blog is us being rahtards on the boat one night. I really love those cruises and could easily just go ship around on one of those boats for a couple months if they'd let me. The guys are hilarious, the weather is fantastic, and we eat like kings. It was honestly the most food I've eaten in the last couple of years. I've really changed my eating habits and improved my diet and nutrition, but the boat was just a total delicious binge. We're talking 5 course dinners with 2 entrees every night (prime rib and lobster yumm), 24 hour free room service (think 3 sandwiches at 4am), lunch buffet, burgers for afternoon snacks, the hits just keep coming.

I didn't really weigh myself so I don't know if I gained any weight, but I know the first few days back I was hungry nonstop. I had totally altered my bodies expectation for food and found myself wanting to eat huge amounts all the time. It took almost a week to get myself back on to a reasonable diet, but it made me think about why so many people in this country are obese. If you allow yourself to eat like that frequently it becomes a mental and physical expectation. Almost like an addiction. And changing your habits (ie diet and nutrition) takes mental will power and work. For me its about not keeping junk food in the apartment (haven't for close to 2 years). No potato chips, no candy, no regular soda, no fruit drink, no ice cream, etc. I think a good general rule is that if the food takes no time to prepare and isn't a fresh fruit or vegetable you should probably reconsider eating it. sure there are exceptions, but if you start there you're going to immediately see an impact on how you eat.

anyway enough of that, but post cruise that was an interesting realization to me. to wrap things up the cruise was awesome again and I can't wait for next year.

- wedding planning is going well. katy finally sold me on the merits of a DJ. we found someone that meets my standards, and I look forward to bombarding the guy with information about what I do and don't want to hear. luckily he's totally prepped and expecting that, and doesn't want the role of MC so that helps considerably. I'm sure we'll need him to announce a few things, but in general the thing I wanted was a guy that could get the music I wanted to play in a timely reasonable manner that would work with the crowd. I want to take stuff I like and get people into it. and this guy gets that and seems to do it well. should be fun.

- botched call on the perfect game tonight was a travesty. I really feel for the player, but I also feel for the ump. That is the kind of perfectly normal human mistake that can haunt a guy and I hope it doesn't. It sounds like he felt terrible about it and even though I had a head asplode moment when I first saw my final thought was "whaddayagonnado?"

- celts lakers tonight is going to be epic. besides all of the teams history I'm looking forward to jesus shuttlesworth (ray allen) shooting sneers at kobe bryant. I'm not a kobe fan and ray might be my favorite celtic so I hope he has a big series. btw ray also perfectly predicted the kobe-tantrum mid 2000s years before it happened (which also set off their feud):

After the Shaquille O'Neal was traded to Miami, Allen was asked about whether Kobe Bryant could lead the Lakers back to the Finals:

He feels like he needs to show the league, that he is better without Shaq, that he can win without Shaq. That he can still average 30 points and he can still carry the load on this team. The point production is not so much what people will look at, because (Tracy) McGrady did it in Orlando and Allen (Iverson) did it in Philly. But can you win championships? Can he make everybody better? He has the talent. But is his attitude going to sometimes allow him to take the backseat and let Lamar Odom shine and let Caron Butler have his nights and bring those big guys along? If Kobe thinks he needs 2-1/2 good players to be a legitimate playoff contender or win a championship in about a year or two he will be calling out to (Lakers owner) Jerry Buss that we need some help in here, or trade me. We'll all be saying we told you so when he says that.

me and 3 of the cruise bros being idiots on the cruise: 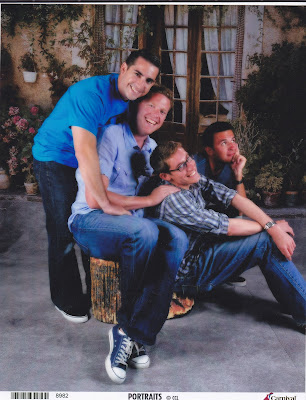