here are my thoughts on a reg's thread in which he asked for answers to a bunch of very close spots in FR NLHE.  In general I think OP's thought process is very illustrative of why some players get stuck playing micro and small stakes and can't work their way higher or raise their winrates.  I think as games continually get tougher at all levels if you can't get past a very basic rote strategy and start thinking about the theory and reasons behind every decision you'll find yourself left in the dust.

A Thread asking about how to approach very close spots at small full ring NLHE game:


the posts in this thread are great. instead of posting on 2p2 and trying to get formulaic answers for close spots, why don't you think about the reason why you would make a given play with each hand against the given opponent with all available information at hand (who's left to act, their stack sizes, etc).

train your brain to start taking in all available information, analyze that info, and make the best decision and you'll continue to be a profitable player for years to come. try to find easier answers that allow you to autopilot against regs while mass tabling and you might as well start looking for other jobs.


after the OP replied asking additional similar questions that really have no definitive answer:


i love how you know I'm going to say "it depends" but don't want me to say it. you know why? Because it implies that there are more difficult questions you need to ask and answer. And learning to ask and correctly answer these questions very quickly in the moment is what will make you a lot of money in online poker. The learning process however is much more difficult than you'd probably like. It's very likely that at some point your attempts at study and learning in poker have plateaued, and similarly your rise up the stakes or your win-rate has stagnated or dropped. I know this has happened to me multiple times over my 5 year professional career.

The only thing I can say is that by asking more questions you're at least taking the right steps towards figuring out how to improve your game. However the next step is to get out of the FR 2009 mentality of your opening/3 betting ranges at every position and start thinking about why you would make any play in any given scenario. you're asking lots of questions about close spots, but the same analytical approach can be given to super common spots. And when you ask and answer those questions (questions you already know the answer to but you may not have put words to) you'll understand the same process that you should be using to evaluate these closer and more difficult spots.

don't forget, you're a human playing against (hopefully) other humans at a game of imperfect information. Your goal is to understand how they play and exploit their tendencies, not to develop a wrote play that will win the most/lose the least if you have no information. If you desire to play that style of game you should consider playing anonymous tables on those networks that have them, and limit your sessions to a few hundred hands at a time.

I'm not going to give more detailed answers because 1) it's not in my best interest to do so, 2) Some people pay me a considerable amount of money to be more specific and 3) it's better to teach a man to fish than to give a man a fish.

please don't take any of the above as criticism as every thing I wrote I could have applied to myself or wish I had known or thought about at various portions of my career. I'm far from a perfect player or high stakes crusher, but I feel confident that everything written above is key to making the leap as a player.


My last post in the thread when OP asked me if he was framing the questions wrong:

no you're not framing it wrong you're just asking pointless questions. The answers to your questions don't matter. The only thing that matters is understanding the OTHER questions that you should be asking to get the available information needed to provide a best answer for those questions. And then understanding how to apply that analytical process to all hands in all spots against all opponents.

No one is going to spend hours trying to address every close hypothetical spot you can come up with in this thread. It isn't worth our time and likely won't greatly improve your game.

Last thing I'll say, the biggest leak I see in your thought process now is that you keep suggesting that most regs don't have identifiable leaks either pre or post. Rarely is this the case. Instead of trying to figure out how to combat the perfect unknown player, why don't you focus on your information gathering at the table. You might be surprised at what you see.


It's 2012 and the poker knowledge base continues to advance and grow every day.  Everyone else is working to get better, you better step up your game or get left behind.

I'm still grinding.  putting in the hours, trying to make enough money to stay out of that cubicle so I can pursue things that really entertain me.  I think my game has improved by leaps and bounds in the last 50 days.  I'm not sure if I've ever studied harder or played with more focus over such a long stretch.  I've played mostly nl100 and nl200 because I don't want to have my roll all in one spot and I'm not comfortable playing higher on a short roll.  Obviously the return of FTP money would be a huge boon to my situation, but I stopped planning on having that cash when budgeting and paying taxes quite some time ago.

I'm proud of my results for this last stretch too: 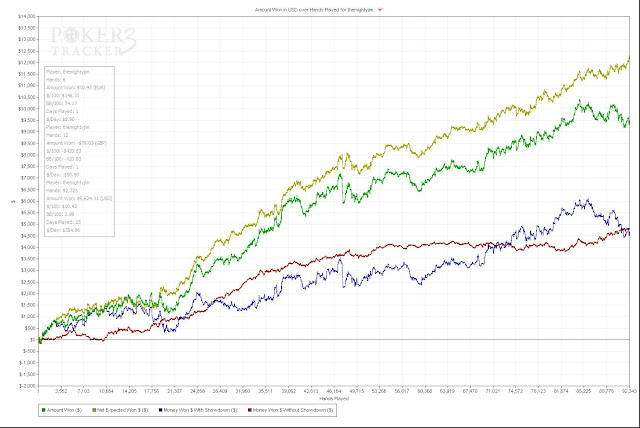 EV wise I should have won about $12,250 over that stretch, but I've run fairly bad and only made $9,582.  That's 3.94 ptbb/100 (7.86bb/100) and would be over 5ptbb if I was running at expectation.  That just goes to show that hard work and study can still pay off.  This stretch wouldn't even be in my top 12 months, but considering what I have had to deal with since black friday it might be the poker result that I'm most proud of.

For the year I'm still running fairly bad, just at 90 buy-ins under expectation for NLHE and about 35 buy-ins under expectation for PLO.  I've stopped playing PLO for the most part because I feel that I'm a good enough NLHE player to overcome a lot of the run bad and still find ways to win.  But in PLO I was playing poorly much of the time while trying to learn the game, and that in combination with running bad produced terrible results.  It's much harder to overcome the variance as you learn PLO as well, so for my sanity and bankroll I've taken a break from it.  I will say that the process of trying to learn PLO may have been the catalyst for my NLHE game getting back to a top tier level.  It forced me to take a more studious analytical approach to poker than I had in some time, and gave me a lot of new things to think about when considering how to improve my game.  It cost me a decent chunk of money, but maybe in the long run the time and money will be worth it.

I need to write a blog at some point about the freak injury I suffered early this year.  It resulted in me having tendon surgery on my hand and is the reason I'm not playing baseball this summer.  It's been another busy year with lot's of other stuff away from the baseball field and the poker tables and I just haven't really had time to type out the story/my thoughts on the accident.  I'll try to find the time soon.

Also I started coaching a client again, and would consider taking on more clients if someone is interested.  My rates vary depending on the number of sessions and the stakes you play, so contact me via the comments section, 2p2, or an email if you'd like to discuss.

I hope everyone is having a great summer/winter (depending on hemisphere) and running good at the tables.