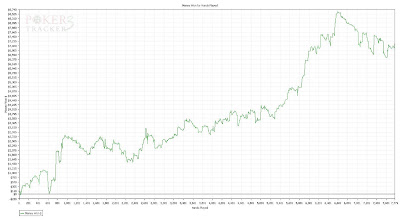 grinded like crazy last night for about 7.5 hours and booked a very nice 7.2k win. Mostly at 2/4 with a little 5/10 and 3/6 mixed in. A little wiped out right now so I'm not going to write a long post, but I had to brag about that. Oh and gotta thank those poker gods for the run good.

Went to the first game of the Bruins playoff series on thursday night and that was a lot of fun. I hadn't been to a professional hockey game since the mid 90s when Huntington had a minor league hockey team called the Blizzard. We used to go to a couple games a year at the Civic Center where they had the rink and it was always a lot of fun. But obviously seeing the Bruins playing the Canadiens in the NHL playoffs was hockey at a whole new level. It was a great game and the Bruins won 4-2. The game was tight the whole way with the Bruins scoring the winning goal with 5 minutes left in the third period. The final score included an empty netter in the last minute which really got the crowd celebrating. After the game I hit up the town with a couple of friends and had quite a few drinks. It was a fun night but it kind of knocked me out yesterday and I spent more of the day sleeping.

When I finally got up Katy and I got cleaned up and went to dinner at a hot pot restaurant with another couple. If you've never been you should definitely see if they have one in your area. It is a japanese style of eating/cooking that is very similar to fondue. Except instead of cheese, broth, and chocolate fondues they stick to very spicy (sometimes hot) broths and lots of seafood and veggies. You can also get other meats and I usually get the surf and turf which comes with thinly sliced beef, squid, shrimp, whitefish, salmon, clams, fishcakes, and scallops. Everything comes out raw and you cook it in the hot pot in the middle of your table. Everyone gets their own broth and you can mix and match which adds to the tastiness. It isn't very expensive either and I think with everyone getting a huge meal and our party had 4 beers (none for me lol) and we only came up to $90. In boston that is pretty cheap considering the quality and amount of food we had. Plus dinner ends up taking 2 hours which is fun because you can actually hang and talk and enjoy yourselves instead of feeling rushed when you finish your meal.

thats all for now. hope everyone is enjoying their weekend.
Posted by Jim Perry at 11:52 AM