When you're finally getting back into the grind and trying to work off some rust that is usually when the poker gods decide to smack you with the variance stick. Not that I have been playing my best lately, but the fact is I've played some pretty good poker to be losing money hand over fist this month.

But since I'm keeping considerably less online right now the losses seem to hurt even more. It's no fun to lose 7-8 BIs and drop half of your account balance. But that is precisely what has happened to me earlier in the week on a site I was playing PLO on. Similarly my NLHE efforts had mostly been a lot of running in place due to some runbad at 2/4 and 3/6 and some all-in EV not going my way.

But today after a coaching session and a little break I sat down and grinded out 3 hours of A game poker. I think I only made one bad decision where I shoved KK pf against a nit when I didn't realize we were 200bb deep. I should have just flatted his 3bet and played postflop IP. Other than that I think I played well. Graph is pretty much all NL200 with a couple tables of NL400 and a table of NL600. I lost at 3/6, won at 2/4, but did nearly all my work at 1/2. 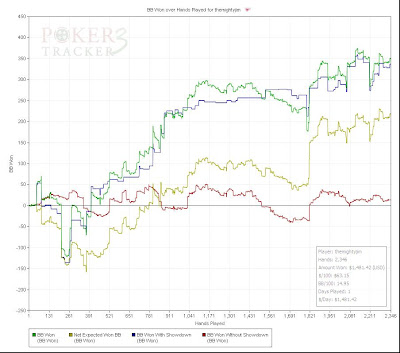 I know it's not impressive like some of the big wins I've had in the past. Heck I didn't even win 10 BIs for the day. But I needed this kind of affirmation that I can still play the game properly. My confidence and mental approach have been sorely lacking lately, and I think it's resulted in a lot of spew and hopeful play (both pf and at the river). Hoping is not a good strategy when playing poker.

Here's hoping the poker gods decide to smile on me a little longer and I can keep it going through the weekend.