getting back to the grind

August was the first month since Black Friday that my poker winnings were worth reporting: 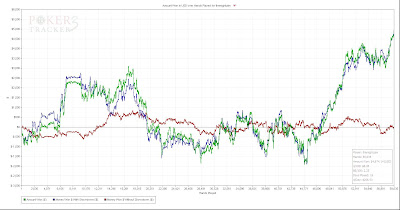 For those keeping score at home that means I had nearly 4 months of potential income stolen by the DOJ and the various entities that sponsored and supported their attack on our game. I'm not going to get into the Full Tilt issues because, frankly, it's depressing and there is little I can do about it. I hope that the personal ethics and honor of the people that stole and mismanaged the player's money will eventually matter enough for them to find away to return our cash. Obviously there isn't a lot of hope for that at this point, but raging against those thieves and charlatans won't make me a happier person.

Referring to the graph: That is almost all 1/2 though I took several shots at 2/4 and got crushed. Without those 2/4 shot I might have made 5 figs with RB and bonuses. The important thing is that I've requested a cashout and expect that I should have the funds in hand in a few weeks.

I'm not totally happy with my results. In general I expect my redline to be better, and I think I played very very poorly during the big downswing on the graph. But part of the redline being BE for the month comes from playing against my opponents. In general the 1/2 players on this network are very very good, and most of them play a very aggressive pro-redline game. I think this creates situation where you need play some hands in different ways and counter their default aggressive mode. I'm not sure that fighting aggression with more aggression is always the most profitable course, especially when out of position.

Other updates include the fact that I've taken steps to start playing on other networks. I won't go into the details because 1) it's relatively boring and 2) I'd rather keep it private. But I believe I should be able to continue playing through this interim period until the US government legalizes and regulates online poker.

I also have some personal goals for the last 4 months of the year. I want to have another 6 figure year which means I need to make about $50k over the final 4 months of the year. This is a pretty significant challenge considering I'll be playing mostly 1/2 to build bankrolls over that period, hopefully eventually transitioning back to mid-stakes. But I think I can do it, and it gives me something to shoot for.

Having a 6 figure year would be a big deal to me considering I essentially lost 4 months of work figuring out stuff after BF. There also is the frustrating reality that despite that profit if I don't get the money back the money lost on Full Tilt equals about 65% of that profit. Which is really disgusting.

But I can't complain about life. My team had a good summer of baseball, my wife is doing well despite her serious work hours during her intern year of residency, and I have my health and plenty of cash for living expenses. I even have enough of a bankroll that I can continue playing the game I love for a living after getting screwed by my government and Full Tilt.

The weather is awesome and I feel like grinding some. Hope everyone is doing well.