Wedding in Cali for the weekend, back to the grind tonight

Haven't played a hand since Thursday morning because I flew 7 hours across country to go to a friends wedding nearly San Francisco. The weekend was awesome despite the lousy weather, and it was great to catch up with a bunch of good friends from college as well as some new friends that I've made through the groom.

I expect Duke to be no. 1 in the polls after the crazy week of college basketball, but really as long as we're in the top 3 I'm happy since we're setting ourselves up to get a 1 seed. Having a 1 seed is a huge advantage in the tournament and I think as long as Duke can go the rest of the regular season with only 1 more loss we should be able to pull one down.

Finally I dowloaded a pretty cool app for my iphone that has some very neat picture editing functions. Here is a photo I took with it yesterday when I was checking out the Golden Gate Bridge: 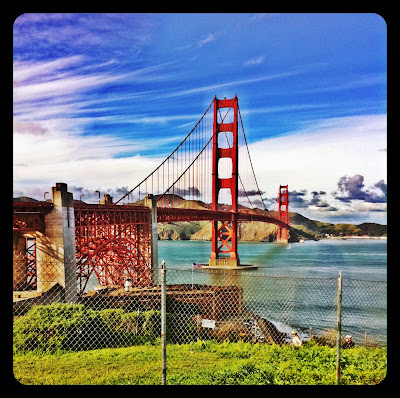 fwiw it's a definite must do tourist attraction if you're there. It's one of those heavily-hyped things that actually lives up to it's reputation. The views are amazing, the bridge is awesome, and it feels very authentic to the city.

I'm going to try and update more this week with my attempts to salvage a reasonable month.

If I had known, I would have advised you to take a Go-Car tour of the city (you probably saw some of their three-wheel 'cars' driving around). You get four unique perspectives of the GG Bridge, plus a whole lot of other places you might not ordinarily see. Glad you enjoyed your time in our City though!